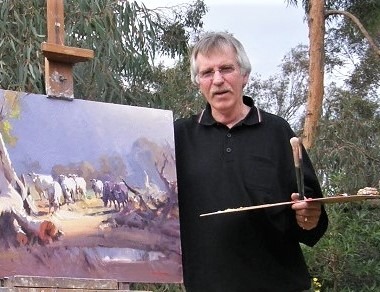 Born in Victoria and with an inherent love of the Australian landscape, Ross commenced oil painting at about 16 years of age, whilst a student in Shepparton,Victoria. He was encouraged as a student, to draw and paint on location (a trend he still maintains).While still a teenager he completed a Diploma of Graphic Design at Caulfied Institute of Technology (now Monash University). This course included life drawing, graphic printmaking, as well as painting and design. Further Art training was acheived through Technical Teacher Training and also under private professional artists during the 1970’s.

Following over twenty years of teaching art in Victorian Secondary schools, and painting part time, Ross resigned from the Education system in 1994 to pursue his passion for painting.

Being a passionate and dedicated artist/teacher, Ross is always in high demand for his popular and informative workshops. He is constantly requested to travel throughout Australia and overseas to teach and encourage willing artists.

*Group exhibitions include China and Taiwan in 1991 and 1995. In 2010, and again in 2012, he has been an invited guest artist in the biennial Shanghai Zhujiajiao International Watercolour Exhibition – one of twenty international artists to receive this invitation.    Solo exhibitions in China have been held successfully- in Shanghai, 2014, Taiyuan in 2015 and Qingdao-Jimo City- 2016.

In 2012 he was one of the selected artists to receive an “Award of Excellence for his watercolour entry- ‘Rooftops,Nth Italy”.

Ross has been a regular contributing writer for Australian Artist magazine for many years,[since 1989], and more recently he has contributed comprehensive articles in U.K. Artist Magazine-2016, and in “L’ Art de Aquarelle” magazine (the French Watercolour magazine)September,2010.

Also,he was published in the excellent follow-up book (released in January, 2011) “The Art of Watercolour-The Book” which features the work of 24 significant International Watercolour Painters.

*2010 saw the release of his first DVD movie: Summer Light in Watercolour”, which features works painted on location in Northern Victoria.This has been produced by APV Films in the UK. A second DVD-“Masterclass”,[in Watercolour and Oil, was produced in 2013, by APVfilms.co.uk

His work hangs in many permanent collections in corporate and municipal galleries and also private collections of art throughout Australia and overseas. In 1998 he was invited to become a member of the exclusive art society ‘Twenty Melbourne Painters’, [one of the oldest art societies in Australia] He is also an invited member of the Australian Watercolour Institute (based in Sydney).

Currently he has over 240 major awards to his credit including being three times winner of the Australian Landscape Award at Camberwell Art Show. His work has been awarded at Victor Harbor a number of times (Major Award, 2005 and  2019); the inaugural ‘Kenneth Jack Award’ for watercolour in Victoria-2007, and many other major exhibitions throughout Victoria, South Australia, New South Wales,France and China.

“Painting to me is all about possessing an intimate feeling for, and subsequent understanding of, the depicted subject. My initial response, usually to an interesting subject and the light and mood associated with it, is envisaged and then interpreted with sensitivity and some conceptual feeling.

Consideration is given to design and then the necessary elements, such as shape (drawing), tonal value, color and texture. To simplify this statement, I look for the ‘shape’ of the building and also the ‘shape’ of the space around this, making sure there is a relevant balance throughout the whole work. As the painting proceeds, the inner feeling and rhythm tends to take over.

As is always with me, that endeavour to capture a moment in creation’s mighty span of time, a fleeting moment, but something of special significance to me as an artist. I am of the opinion that it is a privilege to utilise my God-given talent to the best of my ability during the course of completing each painting.”